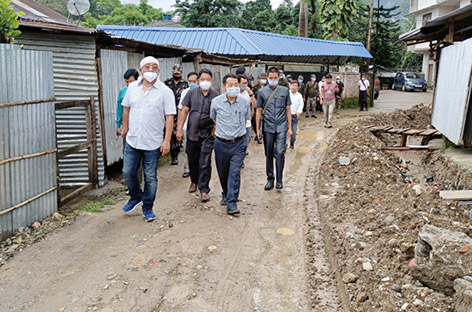 ITANAGAR, Jun 12: Itanagar MLA Techi Kaso on Friday inspected the ongoing construction work for the cement concrete (CC) road and drain at C 1 Sector near IG Park here.
The work is being carried out by the Itanagar Municipal Corporation (IMC), under the smart city project.
Kaso expressed displeasure over the quality of the work for the drain.
“It seems the engineers have not properly guided the contractor. The work is very poor. People should remember that funds will not come every year. We have to make good use of whatever fund the government has provided,” he said while
interacting with the press at the work site.
The MLA also said the road will have to be further widened in the area.
“Unfortunately, people have encroached on the road. ADM Talo Potom will soon initiate action in this regard and carry out eviction. He will work on it,” Kaso said.
He informed that 27 kms of CC roads have been approved under the smart city project, and so far 6 kms of roads have been laid.
“The progress of work has been affected by Covid-19. Chief Minister Pema Khandu and Deputy CM Chowna Mein have given a lot of funds for construction of CC roads in the capital region. In the coming years we will see a lot of improvement. The funds have to be judiciously used,” the MLA said.
He blamed encroachment and illegal earth-cutting for the poor condition of the roads, including the highway, in the capital region.
“Most of the roads have been damaged by the people. We cannot always blame the government. The roads are regularly repaired but people carry out earth-cutting and block the drains. This is the main cause for destruction of roads in the capital complex,” Kaso said.
He appealed to the people to “love public roads as their own property and stop damaging by indulging in reckless earth-cutting.”
Potom informed that he along with members of the construction agency and local members would soon conduct a survey in C 1 Sector for widening of the road.
“The road will be widened. We will hold a coordination meeting soon in this regard. The administration will conduct an eviction drive if people do not voluntarily dismantle the structures falling under the right of way. Itanagar is a city and everyone will have to live as per the law. No one is above the law,” he said.
Officials of the IMC, the PHED and the power department were also present during the inspection.