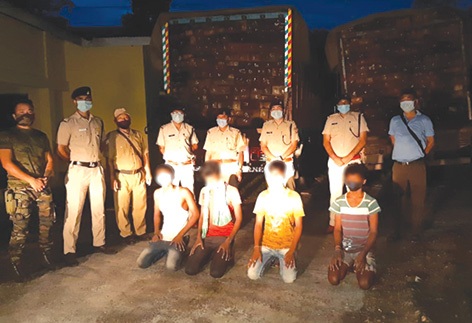 [ Karyir Riba ]
ROING, Jun 22: The kingpin behind the recently seized illegal timber in Lower Dibang Valley district has been arrested by the police here, leading to several revelations about illegal timber trade booming in the state.
Two 16-wheeler trucks loaded with illegal timber worth approximately Rs 50 lakhs had been seized by the police on 14 June, and a case had been registered.
According to the police, one Raju Thakuria, aka Raju Medhi, who owns a timber depot in Dhola (Assam) and was the mastermind of the timber mafia in the region, was arrested from Roing on Monday.
He was lured into a trap set for his arrest, involving an agreement to release the seized timber in exchange for money.
Reportedly, during his arrest, a .32 bore pistol with 13 live rounds and Rs 2.5 lakhs in cash were seized from his possession.
As per police reports, Thakuria’s modus operandi was to obtain illegal TPs from timber depots in Pasighat, in East Siang district. Then, “timber obtained by illegal felling of trees in the reserve forest of Chowkham would be marked with counterfeited hammers of Modi Saw Mill and the Pasighat DFO,” according to the police.
The entire process was overseen by one Manoj Bhuyan, who
is an employee at Parshuram Mill in Chowkham.
The timber would be transported to Assam via Shantipur/Dirak, using the illegal TPs, from where it would be sold all across the country by Thakuria.
Reportedly, the accused has revealed the names of several accomplices across various districts of Arunachal and Assam, including the name of a very close relative of an Arunachal MLA.
The police informed that their investigation is now focused on verifying Thakuria’s disclosures during interrogation, and on arresting all the others involved in the illegal timber racket.
SP Sanjay Kumar Sain said people of the state should understand the negative impact of illegal timber trade.
“Its impact cannot be seen right at the moment, but will surely be seen in the long run. If not checked now, it will affect the state both in terms of the environment as well as economy,” he said, and sought support from the society to “keep up the zeal of the people working against it, and to end the menace from its roots.”