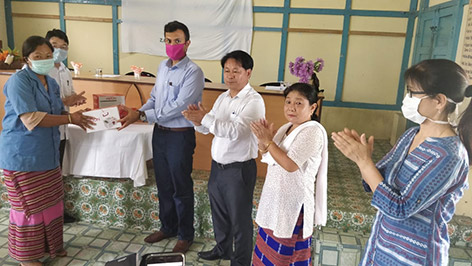 Efforts on to provide two-wheelers: DC

TEZU, Jul 6: First aid kits were distributed among the accredited social health activists (ASHA) and the angandwadi workers (AWW) of Tezu-Sunpura at the zonal general hospital here in Lohit district on Monday.
Each box contains a thermometer, a cotton roll, antiseptic liquid, bandage, drugs for minor ailments, a sanitary pad, a bottle of pain balm, cough syrup, soap, etc.
Attending the distribution programme, local MLA Karikho Kri assured to provide support to the medical department in creating a better health environment. He commended the efforts of the health officials and the district administration over the last three months to prevent the spread of Covid-19 in the district.
The first aid kits were procured with money from the MLA’s local area development fund, 2019-20, informed DC Prince Dhawan.
He said efforts are being made to provide two-wheelers to the ASHAs and AWWs, “especially those who have to cover distant areas.”
Dhawan commended the sincere efforts put in by most of the ASHAs and AWWs, and expressed the hope that they would continue to render services with utmost sincerity and dedication.
Earlier, a two-minute silence was observed to pray for ambulance driver Sangpula Tayo, who died in a road accident on Sunday.
The DMO, the ICDS DD, the medical superintendent, the DRCHO, MOs and other health staffers of the hospital attended the function. (DIPRO)