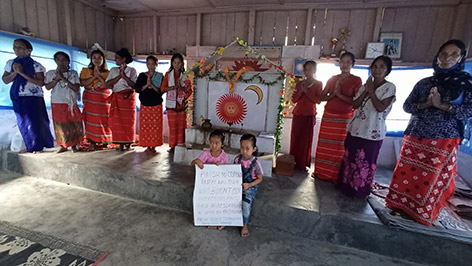 [ Karda Natam ]
DAPORIJO, Jul 15: The Tagin Indigenous Faith and Preservation Society (TIFPS) has appealed to the law-enforcing authority to initiate legal action against those involved in setting fire to the altar and images of the Donyi-Polo in a video that went viral on social media under appropriate section of the Indian Penal Code.
The society vehemently condemned the incident that
reportedly occurred on 4 July in Seppa, East Kameng district where some people were seen setting an altar, images and other materials used by followers of the indigenous faith (Donyi-Poloism) on fire in a purported act of conversion, in a video on social media.
Seeking legal action, TIFPS general secretary Bialum Sorum said that “the alleged act has not only hurt sentiments of indigenous believers but it is also an attempt to infringe the right to freedom of religion enshrined in the constitution.”