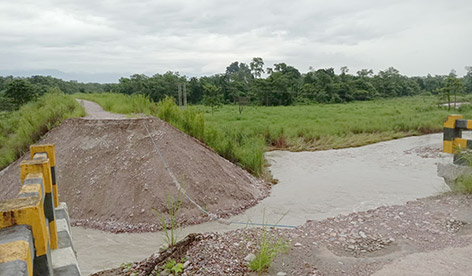 [ Karyir Riba ]
ROING, Jul 20: Six villages in Dambuk circle have been disconnected from the rest of Lower Dibang Valley (LDV) district as the approach road to the bridge over the Sisiri river on the Dambuk-Paglam road has been washed away by the flooded river water.
Villagers of Bizari, Anpum, Loklung, Keba-Tinali, Banggo and Paglam have expressed anguish over the Dambuk PWD subdivision’s carrying out such low-quality work on the bridge, and over the department’s negligence towards restoring the connectivity.
Totem Megu, a villager from Bizari, informed that these villages have been affected harshly.
“We cannot even reach Bomjir. Earlier, in such a situation, we would procure our essential commodities from Pasighat (in East Siang) as an alternative. However, now, because of the growing cases of Covid-19, outsiders are not being allowed to enter Pasighat, making it miserable for us villagers,” he said.
Megu claimed that the bridge, which shows its date of completion as 28 April, 2014, was in fact completed at a later date and has already started forming cracks. He further said that the design of the bridge’s base was faulty and incomplete.
The 270-metre bridge was a Rs 2,750 lakh project funded under the NABARD (RIDF-XII), and the construction work had started on 2 April, 2009.