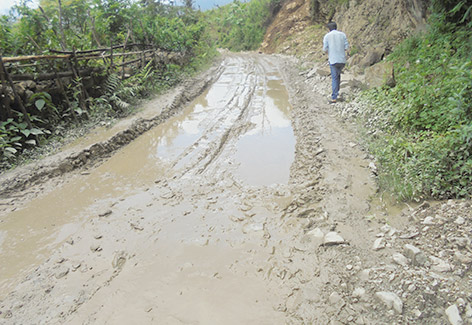 MARIYANG, Jul 27: The villagers here in Upper Siang district have alleged poor quality of work in the construction of the PMGSY road from Mariyang to Millang.

The villagers said the 10-km road is in a very bad shape even after the completion of the first phase of the construction work. They alleged that use of substandard construction materials and non-compliance with the DPR specifications were the main reasons for the bad condition of the road.

“The contractor didn’t use quality construction materials; nor did he follow the specifications in the DPR while constructing the road,” All Millang Students’ Union president Mida Modi and secretary Abraham Modi said in a press statement.

They said the narrow road with large potholes and rough surface exposed the substandard work carried out by the contractor. “The road has become totally unfit for vehicular movement during this rainy season,” they said.

The student leaders demanded that the state government conduct a proper inquiry into the irregularities and take action against the contractor.

Local leader Orin Modi threatened to move the court over the reported irregularities, and alleged misappropriation of public money meant for constructing the road.

Yingkiong RWD Division AE Eda Boko also said he was not satisfied with the quality of the work carried out by the contractor. Boko said substandard materials were being used in the road’s construction. He instructed the contractor to follow the DPR while constructing the road.

The RWD JE who is supervising the construction of the PMGSY road also accused the contractor of building an inferior quality road. The JE said he had directed the contractor to follow the specifications in the DPR but he was called “arrogant.”

The 10-km-long PMGSY road worth Rs 4.95 crore funded by the rural development ministry is being executed by the Yingkiong RWD division. The road was sanctioned in order to improve surface communication between Mariyang and Millang villages, linking the Peki-Modi area.