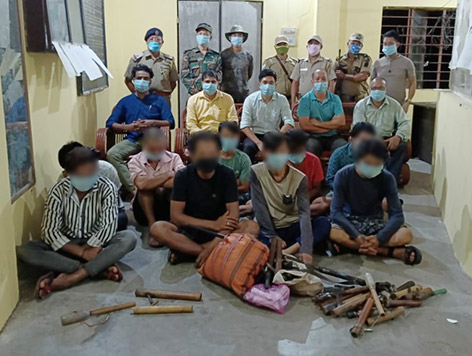 ROING, Aug 7: The anti-drug squad (ADS) of the police here in Lower Dibang Valley district has arrested 10 drug suppliers and seized narcotics and an illegal firearm from their possession.

The ADS team, led by DSP Ringu Ngupok, Inspector RK Mishra and ADS nodal officer Sushant Saurabh Jha conducted multiple raids on various houses in the township area after receiving information about mushrooming sale and use of opium in those areas.

As per police sources, the ADS had been receiving inputs that opium suppliers had increased selling the drug mainly to teenagers, and that the houses that were raided had become hubs for young boys and girls to flock to smoke opium.

Reportedly, a huge quantity of opium and ganja was recovered from the raided houses, along with drugs-related instruments. An unlicensed firearm along with 14 live rounds was also recovered from one of the houses.