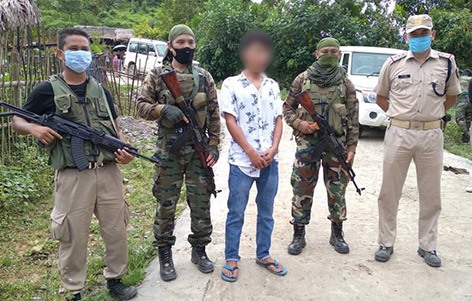 CHANGLANG, Aug 21: An NSCN (R) operative, identified as self-styled (SS) second lieutenant Nankan Hacheng Chengsing (22), was arrested from New Sallang here on 20 August in a joint operation by the Changlang police, the 9 Assam Rifles, and the 149 Bn CRPF.

In another joint operation on the same day, a separate team of the three forces apprehended an SS NSCN (K-YA) private, identified as Johnsam Tikhak (24), from the general area of Namgoi.

Earlier, on 15 August, a SS sergeant major, identified as Alem Konyak (26), was apprehended from the general area of New Shallang by the 9 AR and the district police.

Cases have been registered against all the operatives at the Changlang and the Nampong police stations, SP Mihin Gambo informed.