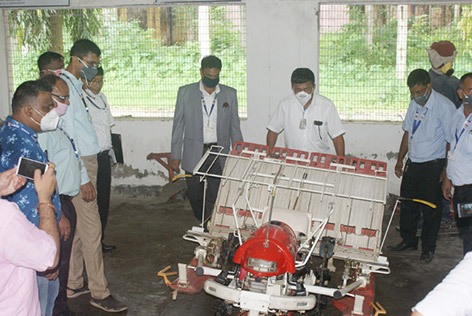 The minister and his entourage also visited the Centre-owned farm machinery training and testing institute in Biswanath Chariali, and interacted with the scientists there.

The team, led by Sotia MLA Padma Hazarika, also visited the Kanyaka integrated farm in Jamugurihat, which is an integrated agriculture, horticulture, piggery, dairying and fisheries breeding farm operated by a trust and supported by 400 SHGs.

The team visited all the sectors of the 2,000 bigha integrated farm, and interacted with the workers and farmers.

The team also visited the scientific piggery farm in Dhekidol (Ghoramari), managed and owned by entrepreneur Manoj Basumotary, who has left a high-paying job in the SBI to become an entrepreneur in the piggery sector.

The minister interacted with the entrepreneur and discussed all aspects of piggery development in the region.

Taki gave assurance that his department would work on piggery development through the PPP mode in Arunachal, in collaboration with the entrepreneurs in Assam.

The AHV&DD director invited Basumotary to visit Arunachal and share his experiences with the piggery farmers of the state.