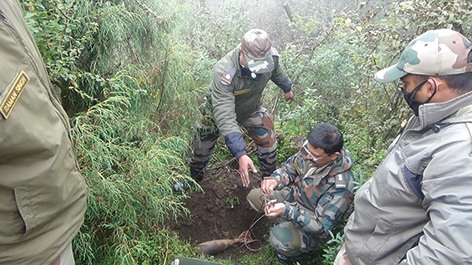 TAWANG, Sep 22: Personnel of the 190 Mountain Brigade on Tuesday destroyed a vintage mortar bomb in situ in Tawang district.

Earlier, the army received information from the Tawang administration that an old mortar bomb had been found half-buried near an old bunker near Nepali Basti by a villager of Nepali Basti.

The 190 Mountain Brigade dispatched a bomb disposal team to the site to neutralize the ordnance. The team assessed the situation and decided to destroy the mortar bomb in situ.

The bomb was corroded and was most probably of 1962 vintage (Chinese origin).