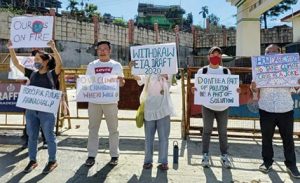 ITANAGAR, Oct 9: Holding placards, young environmental activists staged the first climate strike in Arunachal, outside the civil secretariat here on Friday. The strike was organized by the ‘Fridays For Future Arunachal Pradesh (FFFAP)’.

“The strike was a call for the citizens and leaders to take action for climate justice and to make people more aware about the rising environmental crisis. The young activists of FFF Arunachal addressed several environmental concerns, which include melting of glaciers, rising of the sea level, deforestation, landslides, pollution, etc, and called out fellow citizens of Arunachal to act on it before it is too late,” informed a release from the FFFAP.

Greta Thunberg, who initiated the Fridays For Future movement, has taken note of the first climate strike in Arunachal.

in front of the Swedish parliament every school day for three weeks to protest against lack of action against climate change.

The movement has since gained worldwide momentum and young people across the world have organized protests seeking better environment and accountability on climate change by world leaders.