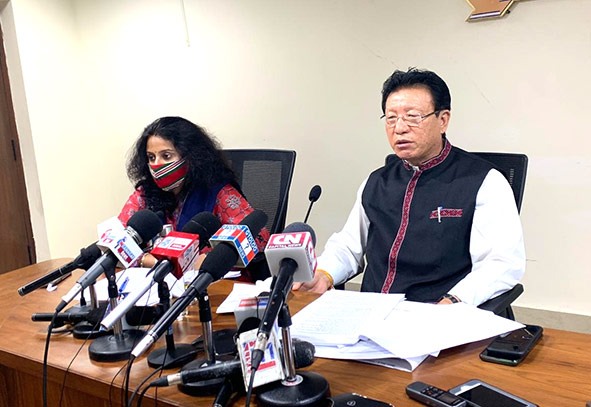 ITANAGAR, Nov 4: Education Minister Taba Tedir on Wednesday informed that the classes for X and XII standards would begin from 16 November.

Addressing media persons at the Civil Secretariat here, the education minister stated that the government has approved for starting of classes of X and XII in view of the ensuing CBSE examination which is slated to be held around March 2021.

He also said after further evaluation of the Covid-19 situation, the government would take a decision for opening of class IX and class XI from December 2020.

Class I to VIII, hostels, residential schools and coaching institutes will remain closed.

Tedir further informed that the community-based organizations were consulted and the consent of parents and school management development committees were taken for starting of classes.

He also disclosed that the matter was placed in the cabinet on Tuesday, following which the government gave the green signal.

Tedir also informed that there will be no board and pre-board examinations for the state board, considering the Covid situation.

“The department would issue crisp and comprehensive standard operating procedures (SOP) to the schools,” he said and informed that a revised curriculum has been prepared, which would be circulated soon.

Lauding Prime Minister Narendra Modi’s government for bringing the new education policy (NEP) 2020, Tedir informed that 300 schools would be set up for Early Childhood Care Education at a cost of Rs 15 crores across the state in the coming academic year.

Tedir stated that under NEP 2020, vocational education and local arts and craft and mother-tongue learning would be emphasized on.

The minister also admitted that online classes in the state have not been successful as many schools in the rural areas do not have internet connectivity.

Education Secretary Niharika Rai informed that the SOP would be circulated to the schools specifying the role of deputy commissioners, deputy directors of school education and principals.

The secretary said that the classes would start by strictly maintaining the SOP, including use of hand sanitizers, face masks and maintaining physical distance.

Rai informed that the colleges would follow the Rajiv Gandhi University’s academic plan.