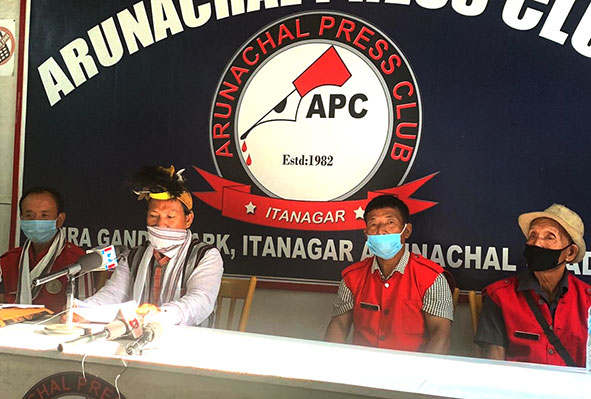 ITANAGAR, Nov 17: Former panchayat members and gaon burahs (GB) of Karsingsa, Dobum and Banderdewa have accused the municipal authority of gerrymandering by merging the electoral voters’ list of the panchayat segment into the municipality area.

In a press conference held at the Arunachal Press Club here on Tuesday, former Karsingsa ASM Taniang Kipa stated that on 15 October, the authority notified the Karsingsa panchayat area as being included in the map of Ward 20 of the Banderdewa municipality, and that the PR members submitted a letter of protest to the town planning secretary to rectify it.

“The State Election Commission has declared simultaneous elections to the 12th Banderdewa panchayat and municipal election without correcting the map and dual voters’ list,” Kipa said.

a resolution to approach the authority for immediate rectification, failing which, he said, the former PR members and the GBs would be forced to resort to democratic movement.

Kipa also alleged that “the map was tempered by the working agency without public hearing and dual voter was created without conducting public hearing.” He claimed that in 2013, the total number of persons on the voters’ list of the Karsingsa municipality was approximately 400, but the current list shows 794 persons – nearly double the number on the previous list.

“Those whose households fall under rural area should remain as rural area. They gerrymandered it without taking consent of the respective GBs of the rural area. We did not even fill out the electoral addition form,” he added, and stated that the officers responsible for gerrymandering and distorting the municipality map should be booked.

The former panchayat members and GBs demanded that the authority reassess the area and “rectify the interface map between Banderdewa Municipal Ward 20 and 12 zilla parishad members by holding a public hearing.”