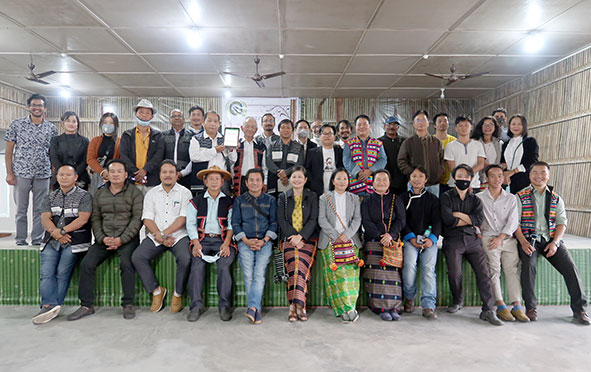 Pulu lauded the initiative taken by the IMCLS under the guidance of its president Ginko Linggi, and said that it was the need of the hour.

Linggi informed that the main objective behind launching the app was language preservation.

“The fact that our Mishmi (Idu) is a dying language is very concerning. Hence, the main idea here is to practice and promote. We devised this four-way approach to promote our dialect – firstly, development of a script, work on which is going on already, and to teach the script as a third language in our schools. Secondly, teaching and promoting the language in lower levels of schools in LDV and DV districts. Thirdly, the use of social media for better reach, for which English to Mishmi (Idu) translation videos are being posted on the official YouTube channel of the IMCLS. Lastly, this online/offline Mishmi (Idu) dictionary app and e-books for children.”

Informing that the target groups are youths and children, he urged everyone to contribute towards the development of the app through its feedback system.

The app was developed by Akhilesh KR, a language researcher and founder of the Vernacular Archive of Northeast India (VANI), which is a non-profit initiative aimed at documenting, digitalizing and developing AI-based tools for the vernacular languages of Northeast India.

Akhilesh said that “technology is best to be used for the purpose because, amongst many other advantages, it allows and encourages self-learning and in a more enjoyable way.”

An e-book for children in the Mishmi (Idu) language was also launched on the occasion by the executive director of RIWATCH, Vijay Swami.

“People of all ages are using technology, so why not make use of it?” Swami said.

IMCLS general secretary Rao Dele appealed to the youths and academicians to participate in the venture to preserve and promote the Mishmi (Idu) language.

IMCLS literary secretary Razzeko Dele said that the app would continue to grow with time.

“We have started with a little less than a thousand words, but will keep on adding more. All aspects like synonyms, antonyms, phonetics, variations, all of them will be covered in time,” he informed.

He also advised social media users to not emphasize on the origin of similar sounding words shared by different tribes, without any proper study and research.

“The dynamics of language is very vast and so such remarks should not be made without documented justification,” he said.