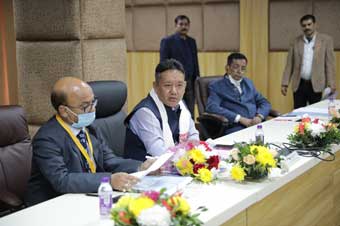 The decision was taken at the joint meeting of the executive committee of the CPA India Region, Zone-III at NERIPSTR building, Khanapara, Guwahati, Assam.

Outgoing chairman and speaker of the Assam Legislative Assembly, Hitendra Nath Goshwami formally handed over the charge of the newly elected CPA chairman.

Addressing the meeting as the new chairman, Sona extended his gratitude to all the speakers of eight north-eastern states for reposing their trust on him to lead the association.

“I am truly humbled and honoured to be elected as the chairman of the CPA India Region (Zone-III). I accept the responsibility with humility and would like to extend my sincere thanks to my predecessor Hitendra Nath Goswami, Speaker of the Assam Legislative Assembly and Speakers of eight NE states for entrusting me with the responsibilities. I look forward to working with them for better regional cooperation and development,” Sona said.

Stating that the objectives of the association are to promote knowledge of the constitutional, legislative, economic, social and cultural aspects of parliamentary democracy, Sona urged upon all the speakers for their equal contribution for the association.

“It’s a new challenge for me and I urge everyone for their cooperation and contribution. We all need to work in tandem with equal responsibilities,” he asserted.

Outgoing chairman Goswami gave a detailed overview on CPA India Region Zone-III. He informed that due to COVID-19 situation, the scheduled CPA conference could not take place at Itanagar. He also informed about various steps taken by him as chairman to strengthen the association and to make the North East Region Institute of Parliamentary Studies & Research (NERIPSTR) pro-active.

He exuded hope that the new chairman will take over the responsibilities and work for betterment of the organization.

“I am very optimistic that under the leadership of PD Sona, the activities of CPA India Region, Zone-III, will continue to flourish and he will be able to take the activities of our zone to a much higher level for greater interest of the northeast region,” Goswami said.

Earlier, the members also discussed ways and means to improve the activities of the NERIPSTR. The members shared their views and ideas which were taken into consideration for further discussion in the next sitting.