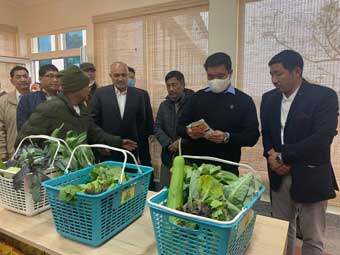 The chief minister was inaugurating the Arunachal Fresh Food Products Outlet under Arunachal Pradesh Agriculture Marketing Board here at the Civil Secretariat on Tuesday.

Khandu informed that the prime minister and defense minister have accepted his proposal of supplying agriculture products from Arunachal to the armed forces.

“Our farmers can benefit from supplying products to the armed forces,” said Khandu.

He also asked the agriculture department to create more awareness regarding organic farming and values through district functionaries.  He complimented the agriculture marketing board for coming up with an outlet to sell organic products. He further hoped that ‘mission organic’ would be successful with the launch of the outlet at the Civil Secretariat.

Agriculture and Horticulture Minister Tage Taki said the outlet would make it easier for the Civil Secretariat staffers to buy fresh and organic products without going to the market.

Taki disclosed that the department is planning to establish a similar outlet outside the mini secretariat in Naharlagun.

Lauding the team for coming up with the outlet of organic products, Chief Secretary Naresh Kumar said, “Arunachal Pradesh can showcase entire country in the field of agriculture and organic products.”

The CS pointed out that the state has favourable topography for organic farming and the agriculture department can capitalize it.

Palling informed that the dignitaries visiting the state, especially the Civil Secretariat, would be target customers and the outlet would run cashless transactions.

Home Minister Bamang Felix was also present during the inaugural.