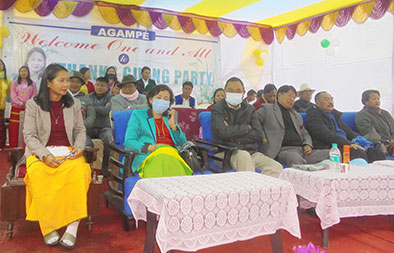 Attending a public meeting at Rayang village, Ering opined that people of his constituency are “vigilant” and “conscious,” and that they would not elect any MLA or MP who fails to achieve remarkable development while in power.

“I am trying my level best to achieve infrastructure development of Pasighat West (Ruksin) area besides creating self employment avenues for the unemployed youths. I fear the fact that people of my constituency change their leaders in every election,” Ering said.

He appealed to the local people to help him work for the welfare of the common people.

He requested the people to maintain close cooperation with the government officers, instead of giving them trouble seeking work contracts.

Also present during the meeting was former Pasighat West MLA Tatung Jamoh, who suggested to the panchayat leaders to work for the common people, ignoring the interest of their political parties.

Elementary Education Director Tapi Gao urged the PRI leaders to maintain close relations with the local MLA and the MPs for sanctioning the need-based schemes, while Ruksin-II ZPM Anung Gammeng sought cooperation from the local people for proper implementation of the panchayat and rural development schemes.