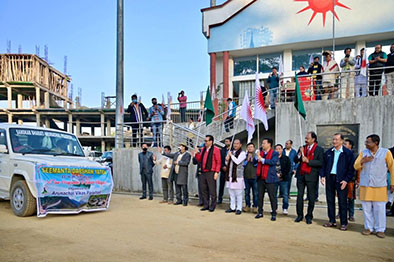 AVP members will tour to far-flung areas along the borders and hoist the national flag on Republic Day in remote villages to assert national integration and patriotism.

The AVP proposes to tour 12 districts across the state, from Tawang to Longding (which have international borders), covering 100 villages.

The objective of the yatra is to promote oneness with the inhabitants of border areas; to promote nationalism and patriotism; to contemplate their living conditions; to comprehend the preeminence of indigenous faith and culture in the daily life of the residents of the villages, etc. The tour is being organized amid reports of China having constructed infrastructure inside Arunachal along the LAC in Upper Subansiri district.

Wishing the AVP team well, the DCM said that developing the frontier areas is significant.

“Frontier areas need to be developed. Frontier road is most important. We need to feel the pain of people living along international borders, who protect the Indian territory,” said Mein.

He suggested to the AVP to submit reports of its tour to the state government after assessing the living conditions of the village people in the remote areas.

Natung said that the yatra would reassure the people living in the remote border areas “that we are with them.”

On the Chinese incursion issue, Natung asserted that the people and the youths of Arunachal would stand by India and the Indian Army when it comes to national integration.

“Arunachal is an integral part of India. We will not cede even an inch of our land to China,” Natung said.

The DGP said that it would be much better if the AVP included representatives from the state police in the tour, “so that awareness on law enforcement could be created among the people.”

The yatra will conclude on Republic Day.