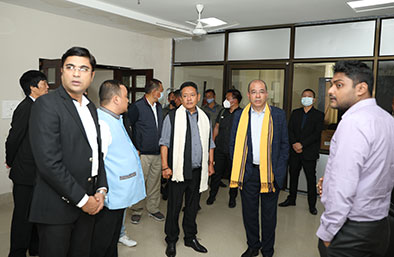 The speaker and a team of officers from the Meghalaya state assembly are on a two-day visit to the state to obtain firsthand information about the national e-Vidhan project, which has already been introduced in the Arunachal assembly. The Arunachal assembly is the first in the Northeast and the third in the country to have successfully implemented the ambitious national e-Vidhan application (NeVA) project.

Lyngdoh and his team were received by Legislative Assembly Speaker Pasang D Sona at his office chamber, and the two speakers discussed the NeVA project and other issues pertaining to regional cooperation.

During the discussion, Sona informed his counterpart that the whole idea of the NeVA project is not only to make all functions of the assembly paperless but also to save time, money and energy.

Later, both the speakers, accompanied by officials, took a tour of the assembly complex and visited the Nokmey Namati Hall, the library, the DK auditorium, the NeVA Centre and the main assembly hall. (Speaker’s PR Cell)