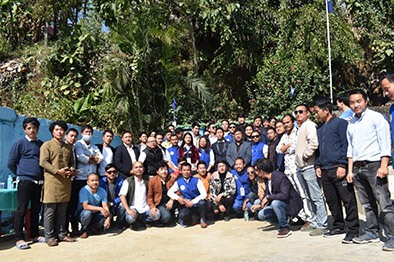 ITANAGAR, 4 Feb: The All Arunachal Pradesh Students’ Union (AAPSU) observed its 35th ‘Martyrs Day’ at the NEFA Club here on Thursday to honour the martyrdom of its activists Kipa Kache, Tobom Bam and Khoda Dolu, who sacrificed their lives for the cause of the indigenous people of the state.

Kipa Kache was declared the first AAPSU martyr after he succumbed to injuries after being shot by paramilitary forces during the anti-refugee agitation in Nyapin in 1986.

Tobom Bam lost his life during the ‘Delhi Chalo’ march organized by the union, while Khoda Dolu lost his life in 2004 while being engaged in the union’s activities.

Paying rich tributes to the martyrs, AAPSU president Hawa Bagang recalled their contributions, and that of all former AAPSU activists.

Members of the NESO and district student unions, former AAPSU leaders and activists attended the programme.

The Martyrs Day was also observed in Bam in Leparada district, and at the GHSS in West Siang HQ Aalo.