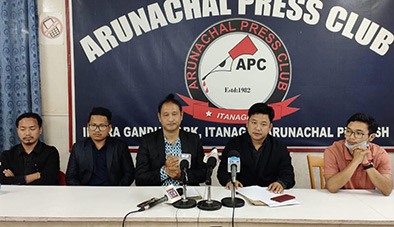 ITANAGAR, 24 Feb: A group of individuals under the banner of ‘Tribal Identity Movement’ on Wednesday demanded that the state government implement the Arunachal Pradesh Freedom of Religion (APFR) Act, 1978, in letter and spirit.

Addressing a press conference at the Arunachal Press Club here, members of the Tribal Identity Movement said that the state government has failed to implement the act, even though it has been passed by the state assembly and

a gazette notification in this regard was issued “some four decades back.”

Stating that not implementing the act was a “deprivation of the state’s tribal population,” Tribal Identity Movement member Debaang Tayeng claimed that no guideline has been issued by the authorities concerned to the deputy commissioners for implementing the act, and that the state agencies do not have any data on religious conversion.

Meanwhile, the group’s members informed that they will be taking out a peaceful rally from Ramakrishna Mission Hospital to IG Park here on 5 March to press their demand, and urged the people to join the rally.