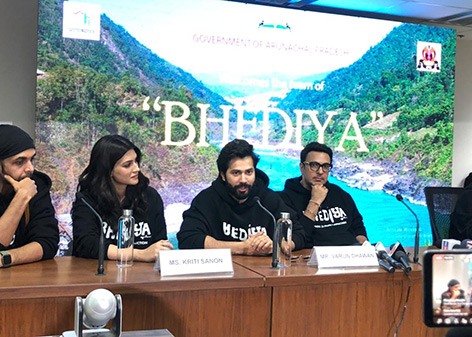 ITANAGAR, 3 Mar: The cast and crew of the Bollywood movie in production, ‘Bhediya’ are here in the capital and are scheduled to shoot in Ziro (Lower Subansiri), Sagalee (Papum Pare) and parts of Pakke Kessang district over a span of two months.

Addressing a press conference here in the civil secretariat,

Bollywood actor Varun Dhawan said that his upcoming film ‘Bhediya’ will promote Arunachal artists, as well as the state’s culture and tourism.

Dhawan informed that about 70 percent of the artists in ‘Bhediya’ are from Arunachal, including a lead character, named Jomin and written by director Amar Kaushik.

The Student of the Year actor further divulged that Arunachal rapper K4 Kheko will also be featured in the film.  Kheko has sung the theme song in the film and also written the lyrics.

He also appreciated the state government for the hospitality and felicitation.

Lead actress, Kriti Sanon, who is playing a character that lives in Arunachal, also praised the beauty of the state.

“It’s my first time in the North East. I had seen pictures from Amar Kaushik’s recce,” said Sanon.

“We are very happy to be here,” said producer Dinesh Vijan, assuring to showcase Arunachal’s true beauty in the film.

Director Amar Kaushik, who has previously directed Stree, spoke of his connection with Arunachal as his father was a forest range here.

“I am an Arunachalee. My father was a forest ranger here and I have grown up in places like Roing, Shantipur, Seijosa, Itanagar and Bhalukpong,” said Kaushik.

Kaushik further asserted that he would try to portray the beauty of Arunachal through his film.

The film is scheduled to hit the theatres in April 2022.

Earlier, welcoming the team, Home and Information and Public Relation Minister Bamang Felix assured that the department would ensure obstacle-free shooting and entourage.

Felix hoped that ‘Bhediya’ would pave the way for other film makers to shoot in Arunachal.

Tourism Minister Nakap Nalo also welcomed the cast and crew to Arunachal on behalf of the government.