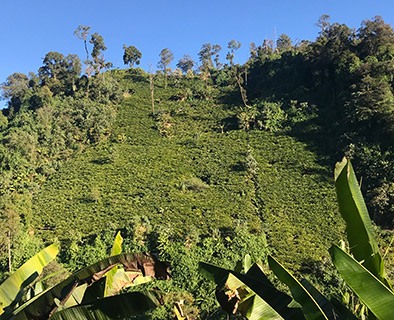 ITANAGAR, 28 Mar: The villagers of Gandhigram have abandoned jhum cultivation altogether in favour of large cardamom, which they say has changed the economy of the area.

Used as a spice and a herbal medicine concoction, cardamom cultivation started some eight years ago and was introduced by the government.

Gandhigram, known as Shidi by the Lisus, has 500 houses with a population of about 3,000, who are mostly into subsistence farming.

Some who had migrated to town have returned to the village to cultivate cardamom, which they say gives lucrative returns, even though farming is labour intensive.

Chasiye, a cardamom farmer, has been farming for six years now. She says that she spends all her time in the field as cardamom cultivation can take up to 11 months – from clearing to plucking and plantation of suckers, weeding, harvesting and curing.

To reduce travel time during the plucking season in winter, she and her family, including a toddler, stay in the field for at least a month. The field is some five kilometres from her home.

Where does she sell the cardamom?

The produce is sold in Miao, the nearest town, to businesspersons who buy it in bulk.

As there are no roads, the farmers hire labourers who walk for upto five days one way and manually carry the produce to the market. On an average one person carries upto 40 kgs.

Sometimes buyers come to the village.

“If buyers come to the village, they will buy for half the price of the market, but rarely do they come,” says Chasiye.

The price fluctuates, but the current rate is Rs 320-400 per kilogram.

The profit margin is drastically reduced in both cases.

Porters charge Rs 135 as carriage charge per kg from Miao to Gandhigram. Ration for four days and vehicle hire charge within Miao township have to be provided to the carriers.

“There is no option other than selling the produce at half the market price if there is pressing need for cash,” she says.

Some farmers don’t sell if the market price is not competitive. If cured well, cardamom can be stored for a longer time.

“We expand every year, so it’s growing,” he says, adding that he also started six years ago and the returns are good.

“Many families depend on cardamom to run their households and to educate the children,” he says.

Education is expensive for the people of Vijaynagar circle, which is unconnected by road, as they have to send their children outside for quality and higher education. Most schools are without teachers and there is one secondary school in the entire circle. They mostly stay in rented apartments in Miao and other nearby schools.

A teacher in Gandhigram says that large cardamom has changed the economy as well as the education scenario as parents are able to send children out to schools with better facilities.

“Jhum has been abandoned,” he says.

Is it leading to massive deforestation?

“Cash and mono-cropping are like a doubled-edged sword,” he says.