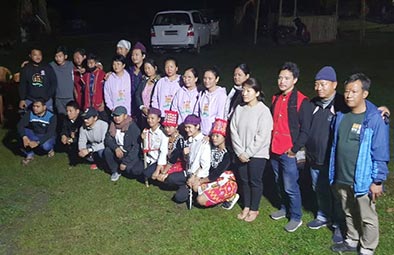 MIAO, 31 Mar: A team of 20 people consisting of tour operators, homestay owners and new entrants in the tourism sector from five districts of the state had on Sunday completed the 10-day tour of eastern Arunachal under Dekho Apna Pradesh.

The group, after touring other parts of eastern Arunachal finally reached here on 29 March. The team visited Namdapha National Park and went for birding and took butterfly walks inside the park on Monday. They also visited the fringe villages or eco-sensitive zones.

The group stayed for two days during which they visited the River Cafe, a popular riverside restrobar, the Cathedral, and Chophelling Tibetan Settlement, known for quality carpet production.

The group also got the opportunity to witness beautiful Singpho folk dances performed by members of Miao Singpho Ramma Hpung.

They also visited Jairampur and experienced the significance of the Stilwell Road and the World War II cemetery.

The group had earlier toured Roing, Tezu, Wakro, and Chongkham.