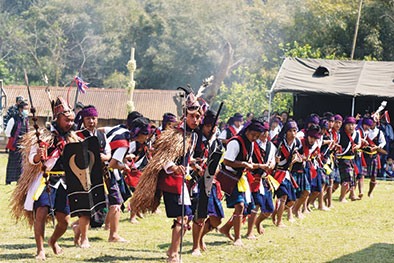 NAMPONG, 25 Apr: Pasighat East MLA Kaling Moyong appealed to the Tangsas to protect and promote their dialects, adding that many dialects in the state are on the verge of extinction, mainly because the young people do not use the local dialects in their day-to-day life.

He was speaking during the Moh Mol festival celebration here in Changlang district on Sunday.

Moyong commended the Tangsas for preserving and promoting their traditional costumes and rich culture. He also urged Tangsa artisans and weavers to participate in trade fairs inside and outside the state.

effort and meticulous planning,” Tatung requested the people not to depend only on government jobs and instead engage themselves in gainful business entrepreneurship. He said Nampong and its adjoining areas “hold promises galore, thanks to the great tourism prospects because of the Stilwell Road which links the area to many countries.”

Earlier, Simai threw light on the significance of Moh Mol festival for the Tangsas. He said that the Tangsas are spread across Changlang district and also in upper Assam and Myanmar.

Narrating the migratory history of the Tangsas, the MLA reiterated that the Tangsas are striving hard to preserve their rich and varied culture, irrespective of professing different faiths. He urged the Tangsas, especially the youths, to “travel the proverbial extra mile to safeguard their dialects, costumes, folksongs, folkdances and other rich legacies inherited from their great ancestors.”

Expressing concern over the reemergence of Covid-19, Simai urged the people to follow the SOPs and health protocols and take vaccine at the earliest.