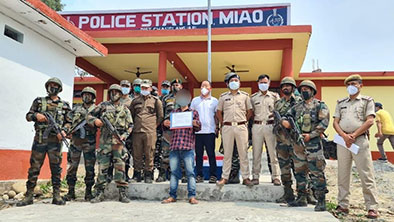 Ngemu said he had joined the NSCN-K in 2011 “under the influence of allurement by the members of NSCN-K organization,” Changlang SP Mihin Gambo informed in a press release.

The SP informed that, after undergoing basic training in Myanmar for three months, Ngemu was staying at Tungmai-III mile in Myanmar, under SS Captain Chauwan Singh of the NSCN-K. “Later, in 2018, he shifted his camp to Tamaikung, Myanmar, from where he finally decided to shun the organization to live a peaceful life in mainstream society,” Gambo said.

This is the third surrender of insurgent operatives in a row within three months. Earlier, two NSCN-K operatives, identified as Markham Ngaimong and Tuman Havi, from New Khamlang village, had surrendered, the SP said, and urged other misguided youths to “return to the mainstream society to live a normal life or face the brunt of the police and security forces.”