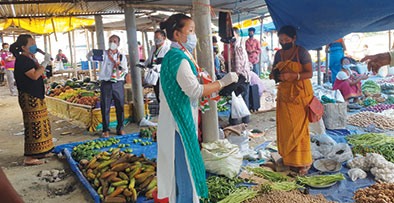 ITANAGAR, 4 May: The Covid monitoring team of the Arunachal Pradesh Congress Committee (APCC) on Tuesday created awareness among the people of the capital region and distributed facemasks and hand sanitizers.

The team, led by APCC general secretary Gyamar Tana, said that the Congress has set up a control room at the APCC office in Itanagar with several phone and mobile

numbers in which people can contact them. Volunteers will extend help and support to the needy persons.

The team, comprising party leaders including Toko Mina, Giogi Ganga and others, started the awareness drive at one of the busiest and crowded daily markets located between Chimpu and Hollongi, then at Chimpu, Gohpur Tinali and Ganga market.

“We also carried a PA system through which we announced the SOPs and other necessary preventive measures to be taken to remain safe from any type of infection, including Covid,” informed APCC general secretary Gyamar Tana.

The team also distributed facemasks to more than 500 people, including shopkeepers, consumers, pedestrians and commuters on the roads.