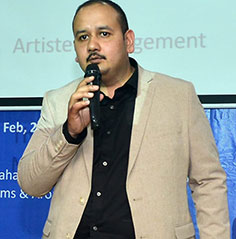 The sun has set on a bright young mind and a lovely soul of the region. Yes, that’s how I would sum up the tragic and untimely demise of Aiyushman Dutta, who passed away on 26 April, 2021 at the unripe age of only 35.

Aiyushman doesn’t need any new introduction – he was a prolific writer, a cultural activist, a journalist, lover of art, culture and music, and what not. Feature Editor of The Sentinel and in-charge of its Sunday supplement for a very long time, Aiyushman wore many hats. Writing extensively on Northeast Indian culture, including folk traditions and traditional cuisines, he also wrote a book “Food Trail: Discovering Food Culture of Northeast India”. In fact, his interest of late was “Culture as an industry” as he would often tell me.

Founder of Eastern Beats Music Society, he was one of the key brains and organiser of Guwahati International Music Festival. Aiyushman was also invited as a speaker to the prestigious Asia Student Leadership Conference held in Singapore in 2019. Needless to say, he was one of the prime movers of the Northeast Writers’ Forum, a literary forum.

But to me, he was and would remain my younger brother. So this piece isn’t meant to describe his contribution to various fields, but a personal tribute to the genial soul. For, a person with an affable nature, he was one of those rare breeds of individuals with whom one could gel instantly and get along easily. And that’s how began our relationship when we both worked for a monthly news magazine.Having known him not for very long though (about six years I guess), we however bonded well and he wouldn’t hesitate to confide in me some of his dreams and plans, his happiness, his sorrow, his anxieties, etc. Together we also travelled to many places in the Northeast as he would sometimes accompany me in my work as I would do in his.

A man of few words, Aiyushman had so much warmth in him and always wore a smile that won many hearts and minds, young and old. Another somewhat interesting, if not unique, attribute about him was that he helped in connecting people with one another, and I must admit that I came to know of some individuals through him only. And what perhaps stood out most in him was his ability to get along very well with people of all age groups – his peers, juniors and seniors alike.

Further, he always had this urge to help others, when in need. I remember him readily offering to lend his car to me without any hesitation on more than one occasion whenever my car had to be given for servicing. He visited our homes on a number of occasions and relished whatever was cooked by my wife. In fact, just a month before his untimely demise, he told me that he hadn’t had food prepared by my wife for quite a while and wished to have the same.

Though we haven’t met in person recently, he would still enquire about us over phone. He called me up more than once when he heard about my surgery few months back as he couldn’t visit me. I will always consider it my privilege to have worked with him and having known him so close in such a short period of time.

His untimely demise is a personal loss to me. You left us in real haste my dear young brother. But I would forever cherish the good times we spent together. Though you may have ceased to exist physically in our midst, your soul will forever live with us. Au Revoir Aiyushman! Praying for moksha of your soul on the occasion of adya shraddha today!