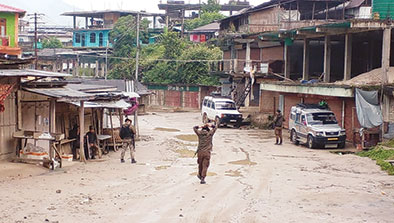 PALIN, 10 May: The 12-hour bandh imposed by the All Kra Daadi District Students’ Union (AKDDSU) to press their three-point demand passed off peacefully here on Monday.

The union’s primary demands include immediate advertisement and recruitment of 41 Groups C and D posts lying under the Arunachal Pradesh Staff Selection Board (APSSB) since 2018, which were reportedly sanctioned in 2016 by the state government for the district.

AKDDSU president Pakyum Talop said that, while the union has received assurance from the APSSB that advertisement would be issued for the posts of LDC, dak runner, peon, etc, before the 20th of this month, the board was unable to give the same assurance for the posts of UDC due to technicalities.

“We require transparency. We need a one-time advertisement for all the 41 posts, including the UDC posts, within the stipulated time, or we will continue with our agitation,” Talop said, while also questioning the three-year delay in advertising the posts.

“How will the youths get employed if it takes three years for a recruitment advertisement to be published?” he asked, and held the APSSB responsible for the delay.

The union has also sought immediate establishment of a fire station and a multipurpose educational counselling centre in Kra Daadi.