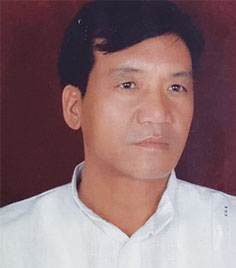 ITANAGAR, 11 May: Former minister Jotom Toko Takam on Tuesday died on the way to a hospital in Assam, family sources said.

Takam, who had a medical history of prolonged illness, died near the Bogibeel bridge at around 1:30 am, they said.

The former minister, with suspected brain haemorrhage, was being taken to a private facility in Dibrugarh.

He was 54, and is survived by five children.

Takam had been elected as MLA from the Yachuli assembly constituency in 1999 on an NCP ticket, but later joined the Congress party and was inducted as a minister under the Mukut Mithi-led government in the state.

“He was a visionary leader who contributed for all-round development of the state, and will be remembered by the people of Arunachal Pradesh. His untimely demise is a great loss for the state as well as the country,” the party stated in a press release.

Expressing condolences to the bereaved family, the state NPP prayed for eternal peace of the departed soul.

In his condolence message, the governor said, “Takam was a distinguished social worker, a far-sighted public figure and a promoter of democratic values. In his passing away, the state and the people of Yachuli have lost one of the senior public leaders who guided the state during its formative stages.”

“With profound sorrow, I write to share the grief of losing one of the pioneering political figures of Arunachal Pradesh. Not only as a minister but also as a humble, honest and a compassionate human, Toko Takam has left behind a legacy to cherish,” Khandu wrote in a condolence letter to late Takam’s son.

The chief minister said that Takam’s calm demeanour, humility and open heart made him stand out as a true gentleman in the galaxy of politicians.

“He will always have a special place in the hearts of every Arunachalee, especially the people of Yachuli constituency,” he said.

The Arunachal Christian Forum (ACF) also deeply mourned Takam’s demise. He was a member of the ACF.

Takam hailed from Poru village in Yachuli subdivision of Lower Subansiri district and belonged to the Revival church in Yazali.

“In his death, the church has lost a very prominent member of the community,” ACF president Toko Teki said in a condolence message.

His last rites will be performed on 12 May.

The ACF also expressed grief over the untimely demise of Isaak Rochunglura Chinzah, who was working as a teacher at Huto English School in Nirjuli, and offered condolences to the bereaved family.

Chinzah belonged to the Baptist church of Mizoram, and is survived by his wife and two children.

Meanwhile, expressing grief over Takam’s demise, Agriculture Minister Tage Taki described him as “a humble and true gentleman,” and said that Yachuli has lost a good leader in his demise.

Education Minister Taba Tedir also expressed grief over the demise of the former minister and extended condolence to the bereaved family.

The Toko Welfare Association in a release said that Takam’s “untimely departure has caused a vacuum irreparable and irreplaceable for the entire Toko family.”

“I am extremely saddened to learn about the sudden and untimely demise of Jotam Toko Takam. He was a vibrant leader with a devoted sense of service to the state and its people. His utmost contribution for the welfare of the people and all-round development of Arunachal Pradesh will be always remembered. In his demise, the state has lost a great leader. May his noble soul rest in eternal peace,” he said.

Tuki, who is also the Arunachal Pradesh Congress Committee chief, extended deep sympathies and condolences to the bereaved family on behalf of the rank and file of the Congress party. (With inputs from Raj Bhavan, CM’s PR Cell, DIPRO & PTI)