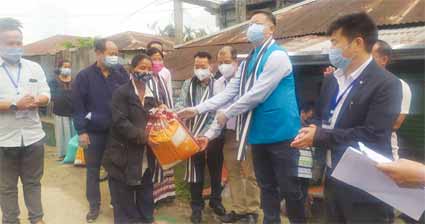 ITANAGAR, 13 May: The biometric authentication of the beneficiaries of the Pradhan Mantri Garib Kalyan Anna Yojna (PMGKAY)-III under the integral management of public distribution system (IMPDS), ‘One nation, one ration card’ policy of the government of India, was kick-started on Thursday at the Rajnivas Cooperative here by Itanagar Municipal Corporation (IMC) Mayor Tame Phassang.

Highlighting the features of the PMGKAY and the provisions under the National Food Security Act (NFSA), ICR DFCSO Amit Bengia  informed that the objective of the IMPDS is to implement nationwide portability of benefits under the NFSA.

Eligible households/beneficiaries covered under the NFSA, particularly the Antodaya Anna Yojna (AAY) and priority household (PHH) will be able to lift their entitled food grains from any fair price shop (FPS) of their choice in the country by using their same/existing ration card after biometric/Aadhar authentication on electronic point-of-sale (ePoS) devices at the FPS in a destination/sale state/union territories (UT) through ‘One nation, one ration card’ system by integrating the exiting PDS systems/portals of states/UTs with the central systems/portals under central repository of all the NFSA ration cards/beneficiaries.

The IMC mayor lauded the initiative of the district administration and the food & civil supplies department for ensuring uninterrupted supply of essential commodities amid the capital containment and distribution of free PMGKAY rice to genuine 3,781 AAY and 66,859 PHH beneficiaries, “covering a population of 70,647 with 735 and 11,819 Aadhar authenticated AAY and PHH ration cards, respectively, of Itanagar capital region, at 5 kg per head.”

The mayor appealed to the residents of the capital to follow the SOPs issued by the government of India and the state government from time to time for the wellbeing of the citizens.

The DFCSO also appealed to the corporators of the IMC to extend support in ensuring physical distancing while issuing ration items from the FPS and other essential shops at their respective wards.