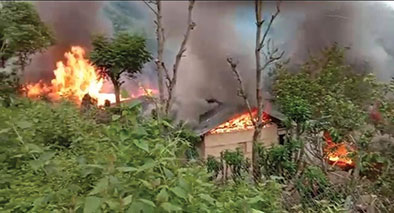 ITANAGAR, 11 Jun: At least three houses were reduced to ashes in a fire that broke out on Friday morning in Dori Putung Colony in New Seppa in East Kameng district.

No casualties were reported.

Official sources in Seppa informed that the fire broke out at around 5:30 in the morning and started from the house of one Talung Yangda. It spread immediately and ravaged two other houses, belonging to Risu Dada and Pacha Veo.

Reportedly, all the belongings and valuable items in all three houses were completely burnt down. Onlookers and neighbours could not save the houses as the fire spread within minutes.

The sources informed that the cause of the fire accident was an electric short-circuit.

They said that the fire tender could not get access to the accident site as it is far away from the road.

Deputy Commissioner Pravimal Abhishek Polumatla along with officials rushed to the spot to assess the losses and provided immediate relief to the victims.