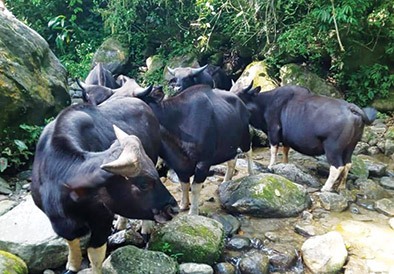 AALO, 14 Jun: Four mithuns have died of foot-and-mouth disease (FMD) while several others have been infected this month at Gemo Tali village in West Siang district.

The people of Yaki Tato village, located near Gemo Tali, performed a traditional ritual to ward off the disease recently, and have confined themselves to three days’ lockdown after the ritual. Transaction, sacrifice and sale of mithuns have either been restricted or banned through circulars to stop further spread of the disease.

In the olden days, mithuns used to gather at spots called sobo soia to quench their thirst (see pic) and it was easy for the owners to visit such places and trace them. But with the passage of time, these places are hardly found.

However, such gathering can now be detrimental to the mithun population as mithuns with FMD could spread the infection to other mithuns. (DIPRO)