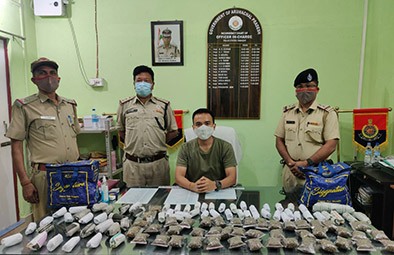 ITANAGAR, 22 Jun: The capital police have arrested five persons in connection with drug peddling, and seized suspected heroin and cannabis from their possession.

On 21 June, a police team conducted raids at different locations in Itanagar with the help of the Arunachal Pradesh Anti Drug Association.

During the raids at small kiosks near Hotel Todo and Gohpur Tinali, the police team seized 90 packets (1.706 kg) of suspected cannabis (ganja) from three shops, leading to the arrest of two female shopkeepers and one male shopkeeper.

On 19 June, acting on a tip-off, another team led by Sikom, Inspector Phassang Simi, SI N Nishant and SI SK Jha, along with the special magistrate (narcotics) conducted a raid in a house in BN Colony, Chimpu, and seized 8.93 grams of suspected heroin, 29 tubes, one mobile handset, one scooter and cash.

The apprehended persons have been identified as Takal Baring and Achung Pangtha. A case has been registered at the Itanagar police station under Section 21 (b)/27 NDPS Act.

They are now under police remand and investigation is underway to nab other culprits associated with illegal trade of drugs in the capital region.

The police teams worked under the supervision of ICR SP Jimmy Chiram.

“During the Covid-19 lockdown, there was a sudden rise in narcotic drugs and psychotropic substances cases and rigorous raids were conducted to stop this social evil,” the police informed in a release.

Ten cases under various sections of the NDPS Act have been registered in the last two months at the Itanagar police station.

A total of 16 persons have been arrested and 322.09 grams of suspected heroin/brown sugar and 1.706 kg of cannabis, having a total market value of more than Rs 25 lakhs, were seized, the police informed.