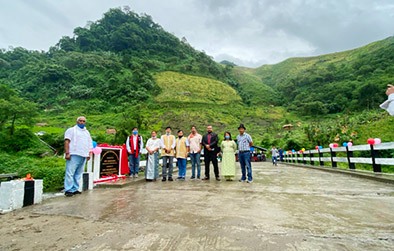 In her address, the MLA said, “The construction of the three bridges was a long-felt dream of my late husband Tirong Aboh, and now we can see his dream in reality today. The 12 km PWD road from circle headquarters Dadam to Moktuwa village, electrification from Dadam to Moktuwa, and water supply in Moktuwa were also initiated by my late husband and former minister Tirong Aboh during his tenure.”

Dadam Block ZPM Jamwang Lowang on behalf of the people of Moktuwa village lauded the MLA for pursuing the long-cherished project, which had initially been sanctioned in 2017 during the time of late Tirong Aboh, and ensuring its completion on time.

PWD EE Wangpong Rongrang informed that the construction of the three bridges from Dadam to Moktuwa village had been sanctioned under the CRF during 2016-17, for an amount of Rs 5 crores.

The DC on his part expressed appreciation for the MLA and her late husband “for bringing the important bridge for the entire people of the village.”