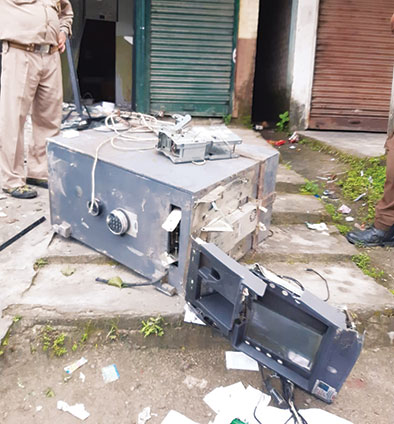 BANDERDEWA, 26 Jul: Two thieves made a failed attempt to drag out the ATM from the SBI ATM booth located near Gate 1 of the Police Training Centre (PTC) here in the wee hours of Monday.

In a video footage from the ATM booth, two masked men are seen entering the ATM booth at around 2:17 am and breaking into the back room of the booth. The lights of the ATM go out soon, but the night vision mode captures their

movement and shows that they are damaging and fiddling with the ATM.

Banderdewa Police Station OC Tadu Hassang informed that the police were alerted by the SBI ATM staff in Hyderabad at around 2:35 am about the security breach in the ATM near Gate 1 of the PTC.

A team headed by ASI J Tam, with Head Constable SK Jha and others rushed to the spot but could not find anyone there.

“Our team was alerted and sent to the location, but we did not find anyone at the spot. The miscreants attempted to drag out the ATM with a rope, probably tied to a vehicle outside, but the vehicle is not visible in the CCTV footage. The ATM locker was also found open and damaged,” the OC said.

The police suspect that the miscreants must have fled the scene on hearing the police siren.

“A petty amount might have been stolen from the ‘reject’ bin of the ATM. The ATM was dragged out of the booth, causing damage to property. A huge amount of money was saved due to the quick response of the CCTV monitoring team and the police,” the OC said.

A written FIR has been lodged regarding the vandalism of the ATM, and a case under Section 427/380/34 IPC r/w Section 3 of the PDPP Act has been registered. The matter is under investigation.