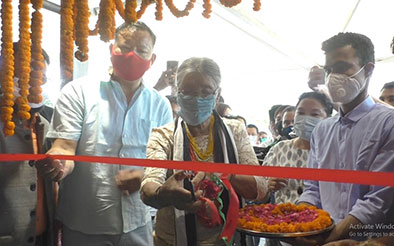 Speaking on the occasion, Phassang informed that the hotel is named after the fond memory of his late forefather ‘Dhassang.’

“Built in a 40, 000 square meter area, Hotel Dashang is equipped with all the contemporary amenities. The hotel will also promote tourism, tradition and culture through arts. As you enter the hotel, one can find beautiful picturesque views of the state with art representing various local traditional dresses. The hotel has a conference hall, lobby, spa, gym, restaurant and luxurious rooms for the guests. The hotel is within the Sohum shopping complex and will also have a multiplex, which is coming soon,” he informed.

He further said, “The idea behind expanding the service from shopping complex to hospitality sector is to provide service to the public of Itanagar capital region. This is rather an effort to encourage the concept of smart city initiative and not profit-making.”

Phassang appealed to the state’s rising entrepreneurs to establish any business larger than life and unique so that the people from the state need not travel to other states and have all the facilities, like any other state.