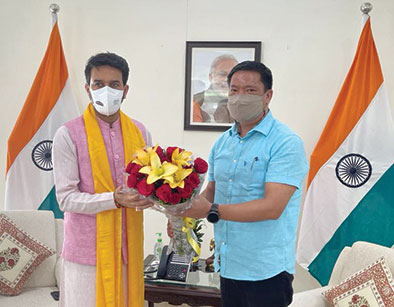 Further, Khandu placed a request for financial requirements on urban tourism infrastructure development plan for 12 tourist circuits of the state. He requested the ministry to consider implementing GIS-based integrated drainage master plan for the capital region, besides seeking relaxation for Arunachal Pradesh on eligibility under the AMRUT scheme.

The chief minister also met minister for sports and youth affairs Anurag Thakur and informed the minister that Arunachal Pradesh has tremendous potential in sports activities.

“The youth in the state have taken sports as a career option which is in fact a positive sign,” Khandu informed and pointed to inadequate infrastructure and facilities as a bottleneck in the sports sector of the state.

The CM requested Thakur to address the issue and release funds pending with the ministry under various heads.

Later in the afternoon, during his meeting with the union DoNER, Culture and Tourism Minister G Kishan Reddy, Khandu emphasized on introduction of North East states in the national curriculum to create greater awareness.

Speaking about the North Eastern Council (NEC), Khandu opined that NEC should act as the think-tank of the northeastern region for creation of ideas and promoting overall development.

The chief minister further requested the ministry to take up comprehensive infrastructure and development schemes for border areas to mitigate migration from border villages. He suggested developing model villages with all basic amenities in the border areas so that it benefits the local populace and promotes tourism in the region.

All the union ministers on their part assured to extend all possible support to the state. (CMO)