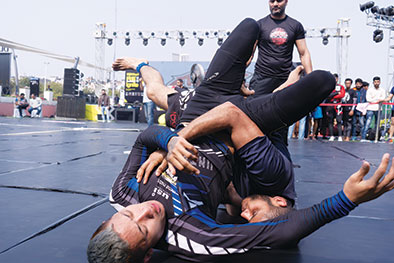 BORDUMSA, 11 Aug:  Jowkhum Dilli of Bordumsa in Changlang district has scripted history by becoming the first-ever Arunachalee to qualify for the Global Association of Mixed Martial Arts (GAMMA), Asian Championship, scheduled to be held in the resort town of Cholpon-Ata on the northern shore of Lake Issyk-Kul in Kyrgyzstan from 24 to 28 August.

Son of Mailu Moko of Bordumsa, the young 22-year-old Dilli had to quit his higher

education in 2016 to join martial arts at Bidang MMA in Guwahati and pursued the course up to 2018. He received training for three months in Combat Clan at Kolkata and then continued learning the art at Abrasumente Academy in Itanagar for six months.

Jowkhum joined Crosstrain Fight Club in New Delhi, one of the top academies that have so far produced many national and international champions.

He was selected for the Asian Championship during a state level contest held at Bangalore in March 2021.

However, Dilli is facing a predicament of varied magnitudes in regards to meeting his daily required food supplements, nutrition, coaching fees and flight tickets for the championship, which involves huge amounts of funds. He has, therefore, urged the Singpho community, the state government and union minister Kiren Rijiju to provide financial assistance to enable him to represent his state and the nation in the international arena.

In the meantime, Bordumsa MLA Shomlung Mossang has offered to bear the cost of flight tickets and accommodation that costs around Rs 1.20 lakhs.

“It is our pride that a local youth from Bordumsa is representing not only the state of Arunachal Pradesh but the nation as a whole,” Mossang said.

Singpho Development Society secretary general Ongyun Maio has also extended financial assistance to the young fighter and assured all possible help in his future endeavours in the world of professional wrestling.

“We wish Jowkhum Dilli good luck and give our blessings for his success,” Maio said.

As news of Jowkhum Dilli’s success story got viral on social media sites, many Singpho leaders, businessmen, government employees and others are coming forward to extend help to the MMA fighter.