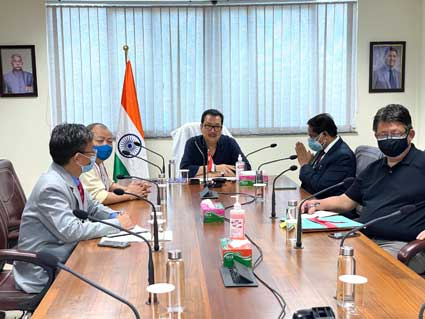 ITANAGAR, 9 Sep: The state-level core committee established to recognize the unsung heroes of the state who had fought against the British invasion during the colonial rule has decided to form a sub-committee which will work under the guidance of the core committee to carry out research activities and documentation in the matter.

The sub-committee will be headed by Prof Sarit Chaudhuri of the anthropology faculty of Rajiv Gandhi University (RGU), Doimukh.

The decision was taken during a meeting of the state-level core committee, chaired by Deputy Chief Minister Chowna Mein in his civil secretariat office here on Thursday.

“The people from the state and the Northeast region have also defied the British rule and sacrificed their lives while defending our people and land. However, unfortunately, their sacrifices were not recognized till date and their story of valour  is unheard of and not known to the outside world. It is high time to recognize them and give them a befitting tribute during the year-long celebration of Azadi ka Amrit Mahatsov,” the DCM said.

The state government formed the five-member state-level core committee, headed by the DCM, to conduct research on the contributions of various personalities of the state in the nation’s freedom struggle; to collect and examine authentic documents, archives, journals, etc, available in libraries and other places; to seek comments of eminent personalities and other people in this regard, and to visit any place of relevant historical interest and take steps as deemed fit to give recognition to the unsung freedom fighters of the state.

“The committee will give suitable recognitions to the government after research works and documentation is compiled and completed,” the DCM’s PR cell informed in a release.