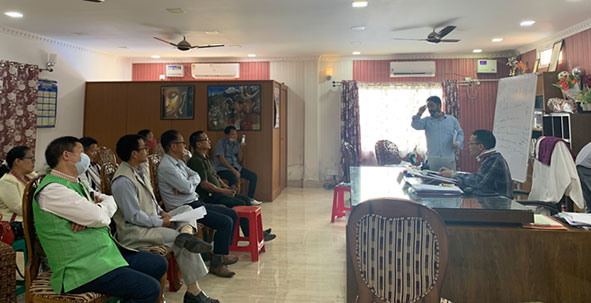 “The district administration has been conducting awareness camps on drug menace on a mission mode, but to make our state drug-free, collective effort from all sections of society is required,” the DC said during a meeting with the members of the APCRCC and NBCC in his office chamber here on Thursday.

He also informed about the initiatives that have been taken by the state government for drug de- addiction and rehabilitation.

“As the percentage of relapse is found to be higher,” he said, “it is necessary to urge the parents and  guardians  to provide all the required support to those under rehabilitation or recovery.”

The representatives of APCRC and NBCC extended their cooperation and also informed about the initiatives that have been taken from their end to stop the drug menace.

During the meeting, the DC also informed about the proposed artificial limb fitment assessment camp for Divyangjan at Itanagar, which will be held free-of-cost by a non-government organization, namely Shree Bhagwan Mahaveer Viklang Sahayata  Samiti, Jaipur, in collaboration with the Capital District Administration and Social Justice & Empowerment and Tribal Affairs department, GoAP.

He sought their cooperation in generating information about the camp so that many beneficiaries can avail the benefit of the camp.

Those willing to avail the services of the camp may submit their application in prescribed format to the DC’s office by 1st October 2021. The form may be downloaded from www.Itanagar.nic.in (DIPRO)