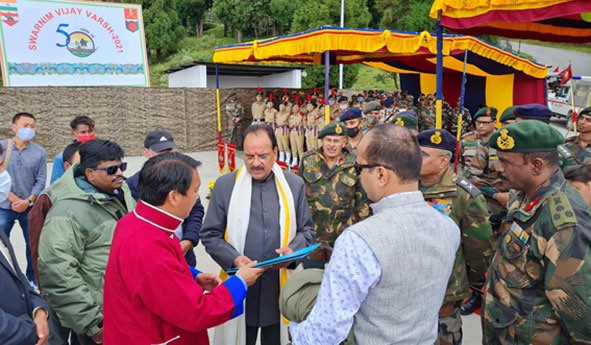 TAWANG, 22 Sep: Junior Defence Minister Ajay Bhatt on Wednesday paid tributes to the martyrs at the War Memorial here after receiving the Swarnim Vijay Mashaal or the Victory Flame that symbolizes India’s victory over Pakistan in 1971.

Bhatt also interacted with the jawans of the Indian Army near the war memorial.

“I have interacted with our jawans in forward locations today, their spirit is very high,” the defence minister told the media persons.

He also lauded the civil-military relations in Tawang and said: “Wherever there is the Indian Army, they always keep good relations with the civil population and always extend their helping hands whenever needed.”

“They should cooperate with each other in developmental activities.”

Interacting with the NCC cadets, the minister said: “You should be ready to serve your nation. The future of this country lies on your shoulder.” He also encouraged the NCC cadets to join the Indian Army.

Local MLA Tsering Tashi briefed the defence minister and the GOC Eastern Command on joint land re-assessment and about the meeting held under the chairmanship of the chief minister on the same matter here on Tuesday.

Earlier, the defence minister, along with the senior officers of the Indian Army paid their tributes to the martyrs at Jaswant Garh and Bumla.

In the afternoon, the minister and senior officers visited Tawang Monastery and offered their prayers. (DIPRO)