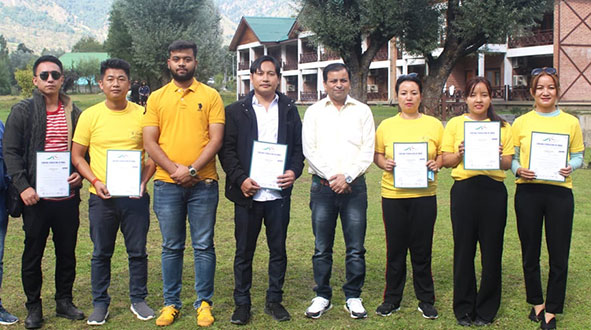 ANANTNAG, 27 Sep: A six-member team from Arunachal Pradesh participated in a ‘CFI national ice-less curling training’ held at the government polytechnic college here in Jammu & Kashmir from 22 to 26 September.

Players and trainers from 17 states across the country took part in the training. These trainers will now train players in their respective states and prepare teams for the Khelo India National Winter Games, which will be held in December in Jammu & Kashmir.

Arunachal Pradesh Curling Association (APCA) president Sanjoy Dolo exuded confidence that “Arunachal would do outstanding in the game as the state trainees won against a senior team from Delhi by three points.”

Dolo informed that the APCA will conduct a ‘curling training seminar’ in the state in November, during which they will introduce the game to interested players and provide proper training to all the players. The association will also select players from the seminar to represent the state at the Khelo India National Winter Games.

“Curling is a team sport, usually played on ice, where two teams take turns to slide stones made of granite towards a target, known as a house. It is a regular Olympic and Paralympic winter sport with medal disciplines for women’s, men’s, mixed doubles’ and mixed wheelchair teams. However, it is a very new sport in India,” Dolo informed.

“Curling will also be the first winter sport in the state, and since it is new to our country as well, our state players have a good chance to get selected for the Olympics,” he added.