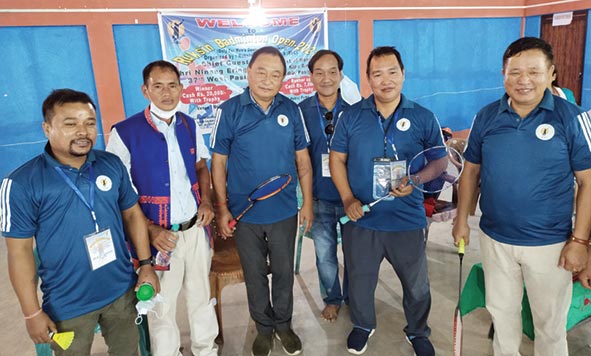 RUKSIN, 13 Nov: A prize money badminton championship (men’s doubles, non-ranking), being organized by the Ruksin Badminton Club (RBC) under the aegis of the East Siang Badminton Association (ESBA) began at the multipurpose auditorium here on Saturday.

Thirty-five badminton teams from various districts of the state, along with a team from Dhemaji (Assam) are taking part in the event.

Pasighat West MLA Ninong Ering, who inaugurated the event, advised the players to maintain the spirit of sportsmanship throughout the championship.

ESBA president Naku Taloh, who is also participating in the championship as a player, lamented the poor infrastructure for badminton in East Siang and appealed to the elected leaders to take up the issue with the government.

The opening match was won by Zirbom and Sora from Nari (Lower Siang district), defeating Nyali Kadu and Samuel Jamoh from Pasighat (East Siang) 21-16 in the first set and 21-18 in the second set.