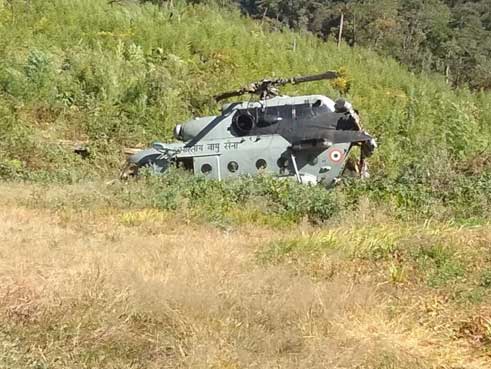 ITANAGAR, 18 Nov: A Mi-17 helicopter of the Indian Air Force (IAF) reportedly crash-landed at the Rochham helipad in Anjaw district on Thursday morning.

Sources in Hayuliang informed that the chopper was carrying out a ration sortie from Hayuliang to Rochham when the incident occurred, at around 9:25 am.

All crew on board are reported to be safe. However, an engineer sustained minor injury during the cash-landing, it is learnt.

Reportedly, there were five crew members onboard, including Squadron Leader Reddy and Kartik Patni, who were flying the helicopter.

The helicopter’s tail rotor was reportedly damaged during the crash-landing. ITBP troops in Rochham rushed to the spot to carry out rescue operation.

An official inquiry has been ordered, the sources said.