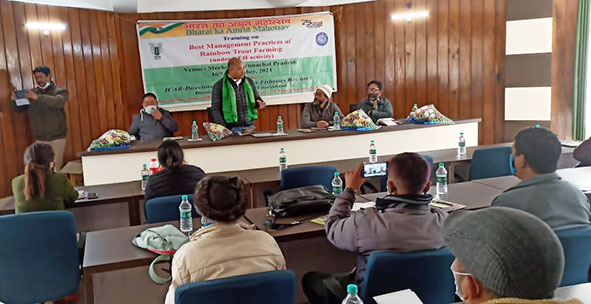 In his keynote address, Director of Fisheries, Joyshil Taba highlighted the high potential for aquaculture development in Mechukha, especially trout fishery and its strategy.

Deputy Commissioner Mito Dirchi urged upon the farmers to avail the benefits of various schemes under state plan and CSS being implemented by the department for the welfare of fish farmers. He further exhorted upon the beneficiaries, especially the women, to come forward and adopt aquaculture for sustained income and to become self-reliant.  He also opined that aquaculture should be clubbed with eco-tourism, which he believed would be beneficial in doubling their income.

In the technical session, scientists from the ICAR-DCFR dwelt upon the advances made in trout culture and various tips regarding enhancement of production and productivity of trout in the region.

The District Fishery Development Officer and Fishery Officer also delivered a lecture on the management aspects of trout culture.

The training concluded with an interactive session among the farmers and the resource persons and also with the officers of the Directorate of Fisheries.

Prior to the training, the director of fisheries, officers from the directorate and scientists from the ICAR-DCFR visited numerous trout farms/ raceways developed by the farmers under various schemes, and were impressed by the work done by the farmers in augmenting trout culture in the region.

The team also visited the proposed site for the establishment of a state-of-the-art brown trout culture facility at Lallung and a new hatchery complex for trout seed production facility at Dorjeeling village.

The scientists were of the firm opinion that with the efforts being put in by the farmers, the day is not far when Mechukha will be recognized as a trout farming hub in the entire north eastern region.

They further assured the beneficiaries of their full support and cooperation in their endeavour.

The farmers also appreciated the efforts of the department to popularize the trout culture and assured their full support.

While interacting with the farmers, the director of fisheries assured them that a trout hatchery will be established at Mechukha very soon to meet the growing demand of quality trout seed, which will further boost trout culture in the region and will mitigate the problem of seed scarcity. He further assured the farmers of all possible help from the department.