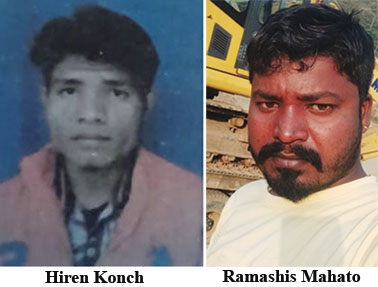 Of the three abducted persons identified as one Banphua Wangpan from Longding, Hiren Konch from Assam and Ramashis Mahato from Bihar,  Banphua Wangpan has since returned to his native village Longkhaw on Tuesday last.

However, the other two persons Hiren Konch (31) from Biren Konch, village- 2 no. Keseruguri, Kacharuguri, Dibrugarh, Assam and Ramashis Mahato (35) from Bihar (both excavator drivers) are still under the captivity of the UG outfit.

As per the police report, on the night of 31 January around 9.30 PM, a group of five to six suspected unknown UG cadres allegedly belonging to NSCN (K-YA) came to the camp of the laborers engaged in road construction work and abducted the three persons and took them towards Nagaland.

The abductors reportedly took away the mobile phones and keys to the vehicle from other workers, and therefore, they could only inform authorities about the abduction the next day as they had to walk a long distance to reach the town.

Longding DySP B Tangjang on Wednesday informed that police suspect that ransom might be the motive behind the abduction.

“A case has been registered and the police along with security forces have presently launched a massive search. We suspect the abductors might have taken their captives towards Zahsia village in Mon district of Nagaland,” the DySP said, adding that they are closely monitoring the situation.