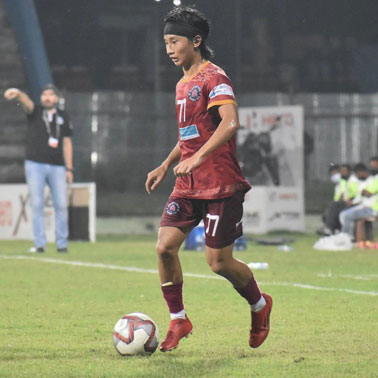 ITANAGAR, 18 Jun: Arunachal Pradesh’ promising football player Gyamar Nikum, who made his Hero I-League debut with Rajasthan United FC last season, has been called up by the All India Football Federation for the national U-20 training camp to be held in Bhubaneswar, Odisha, from 23 June onwards.

The camp is being held for preparing and selecting players for the national U-20 team for various international football events, including the SAFF U-20 Championships (25 July to 5 August) and the AFC U-20 Asia Cup qualifiers (September).

The 17-year-old youngster from Nyapin in Kurung Kumey district is one of the youngest players to make his debut in the I-League. He was declared player of the match in the Hero I-League match against Churchill Brothers FC.

Nikum had also represented Arunachal in the BC Roy Trophy tournament, which was held in Himachal Pradesh in 2018-19.

“I am very much excited and eagerly looking forward to attend the national camp. I will really be very happy if I get selected,” Nikum told this daily.

He will be leaving for Odisha on 20 June.