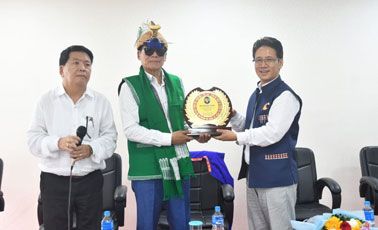 PAPU NALLAH, 1 Aug: Information & public relations director Dasher Teshi was given a warm farewell on his superannuation in a function here on Monday.

During the farewell function, IPR Secretary Ajay Kumar Bisht thanked Teshi for his contributions to the department and wished him all the best “for his second innings post superannuation.”

Several officers and officials spoke of their association with Teshi and described him as a “very liberal, honest, straightforward and humble officer who always worked for the welfare of the department and the public.”

Teshi in his speech said that he will now utilise his time doing social work and “make up for the lost family time.”

“For the efficient functioning of office, one should have regard for each other that would help one earn love and respect,” he said.

Teshi had joined service as a DIPRO in 1988 and was posted in East Kameng HQ Seppa. He had joined as the IPR director in March 2021. (DIPR)