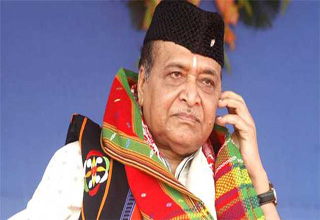 Itanagar, Nov 10: The Arunachal Pradesh government has erected a statue of legendary music composer and singer Bhupen Hazarika at Bolung village in Lower Dibang Valley.
The ten feet bronze statue, sculpted by Biren Singh of Guwahati, was erected in the village this year. It would be formally unveiled tentatively in the early part of 2018, an official told PTI.
“The state government had allocated Rs 30 lakh for the statue in 2015 as a tribute to the legendary singer who contributed a lot for the state in the cultural field. Bhupen da is more an Arunachalee than an Assamese,” Director of Research Department Batem Pertin said.
The Bolung village is adjacent to Assam’s Sadiya area where his parents lived.
Pertin said that the government in 2016-17 also allocated Rs 70 lakh for erection of two statues of Hazarika at Yazali in Lower Subansiri district and Itanagar.
Pertin, who is also the general secretary of the Arunachal Pradesh Literary Society (APLS), said that due to persuasion of the society, the government approved the Bolung project.
“The land for erecting the statue was donated by the sons of former MLA Gora Pertin as a tribute to Hazarika,” Pertin said.
“Bhupen da through his songs tried to unite the entire north eastern states in a single string. He not only composed songs for Assam but for all the NE states, he said.
In a region ravaged by years of insurgency, Hazarika had been a voice of moderation. For years his revolutionary lyrics bearing powerful messages of social change have resounded in the hamlets and valleys of the north eastern region.
Hazarika also produced the first Arunachalee content based film in Hindi ‘Mera Maa Mera Dharam’ in 1976 and shot his Assamese film ‘Rashmi Rekha’ in 1971-72 in Arunachal. (PTI)